Have you ever had a profound experience in your life that returns in smaller pieces later on in your life, almost continuing to remind you of that first initially amazing experience? Not de ja vu. Not anything abnormal, but just a moment in time that brings you back. I’m almost certain people have these occur to them quite often, because let’s face it, our mind makes connections with images, sounds, tastes, smells, and other stimuli with prior experiential things.
I’ve wanted to write a blog about all the different and specific places or moments in my life that a song reminds me of.  It’s a common thing for some people to write about as it is quite personal but yet interesting. But I am going to hold off with that topic and talk about an experience I had last weekend.
But instead of telling you both stories from most recent to longer ago, I’m going to splice it, going back and forth between last weekend and eight months ago where I had an incredibly similar experience.
Last weekend: I had gotten tickets to a soccer match between the USA men’s national team and Argentina at the New Meadowlands Stadium in New Jersey. My girlfriend and I went with her two friends, and their boyfriends.
In June: I had gotten tickets to the 2010 World Cup in South Africa with my good friend Colin, his girlfriend Kelsey and her best friend Emily.
Last weekend: Before the Saturday match, I decided to head up to Hoboken to visit my best friend Drew and hang out for a handful of days, catch up with friends in New York City and have a good time going out and seeing parts of the city. I was to start work the next week, so I wanted to take advantage of my last few free weekdays I had.

In June: Before kick starting my eight match journey at the World Cup, I flew into South Africa about a week before my friends would arrive from America. I had just finished working in Thailand in February and was ending a stretch which included traveling, ordaining as a Buddhist monk, celebrating the Thai New Year, and packing all of my things from two years in Thailand to prepare to move back to America. So once I arrived in Cape Town (late by two days) I went directly to Lesotho to visit a friend doing Peace Corps there. I hung out in the country for a week before getting back to Cape Town to meet up with Colin and Kelsey.
Last weekend: Match day. I woke up on Drew’s couch in a bit of pain from a late night of drinking the night before. Being a quasi-nomadic person, I was not so much confused as to where I was but rather what my plan was for the USA soccer match at 7pm. My girlfriend arrived later that day as I was putting on all of my American gear, the same as I wore back in South Africa. Long sleeve undershirt because it was freezing outside, check. Clint Dempsey USA long sleeve jersey, check. God Bless America trucker hat, check. USA scarf, check. The ol’ stars n’ stripes flag caped around my neck, check. I was ready to roll.

In June: Match day. I woke up on my South African friend Lise’s couch in a lot of pain, my ribs and back hurt from the short couch I passed out on, my head hurt from the late night of drinking in my first night in Johannesburg. I was sort of confused because Colin or Lise were both gone from the apartment and I had no idea what to do. Finally after gathering myself, showering and organizing my clothes on the counter, Colin came back. It was our first USA match of the World Cup today, as we couldn’t get tickets for the England match a few days prior. I organized my wardrobe for such a big match. Long sleeve undershirt because it was freezing outside (although summer in America, it was winter in SA), check. Clint Dempsey USA long sleeve jersey, check. God Bless America trucker hat, check. USA scarf, check. The ol’ stars n’ stripes flag caped around my neck, check. White shorts to bring the entire kit together, check. I was ready to roll, even if freezing my entire body. 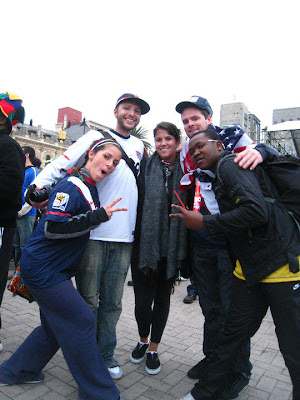 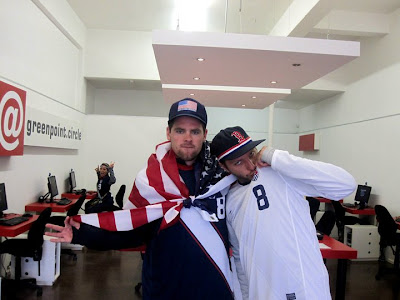 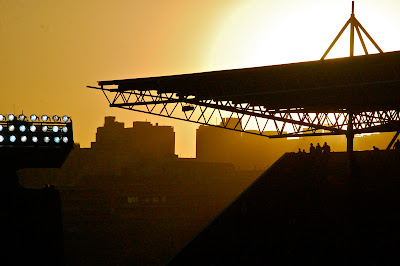 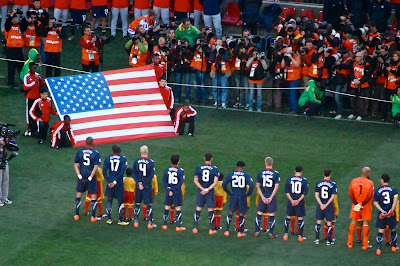 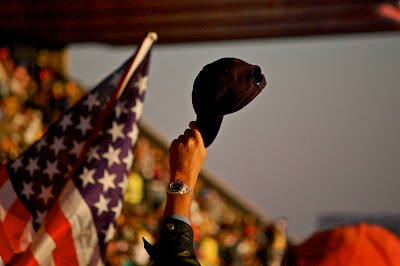 Last weekend: The second half begins in New Jersey with cold beers in hand, a cold body trying to get warm, and even colder attitudes from the people around us. Perhaps the weather or the poor play of USA in the first half is the reason, but the people sitting around us are rude and aggressive to my girlfriend and me. I try to think nothing of it, but cannot help but think back to the matches in South Africa where if you were supporting the same team, your attitudes remained the same, excited and full of camaraderie. I am not getting this feeling around me, but soon enough it all washes away as the US tied the match up with a clean up goal from youngster Juan Agudelo. The stadium goes nuts, the girl behind me is throwing confetti, and the roar of the crowd heats up the chilly venue. The final whistle blows and most US fans would say it is an impressive draw against an incredibly talented Argentina squad.
In June: The second half started with a bang right from the kickoff as Landon Donovan took a ball from the flank and instead of crossing it through the box, took it on his own and rifled it at the Slovenian keepers face to rock the roof of the net to cut the lead in half to 2-1 with plenty of time remaining. We felt good. But not too good, coming back from two goals in one half is possible, but with our squad, it seemed a bit far-fetched. But the US fans around us loved it. The South African fans sitting behind us were not cheering for Slovenia yet they were cheering against USA and that bothered me. Competitive passive comments at a sporting event usually fire me up, but I remained composed, especially because my squad was still losing. But Michael Bradley changed all of that with only eight minutes to play. A stunning strike from the young midfielder brought the match back to even, and the little stadium was louder than ever. The red, white and blue flags waved everywhere, the vuvuzelas were going vuzi, and the match got rather interesting as the States had the momentum, the crowd, and pretty much everything going for them. Except Koman Coulibaly. The Malian referee changed the entire landscape of US soccer with one miserable call on a free kick that Maurice Edu scored in the 89th minute to essentially win the game and make for the greatest comeback in US soccer history, and perhaps one of the finest in World Cup history. 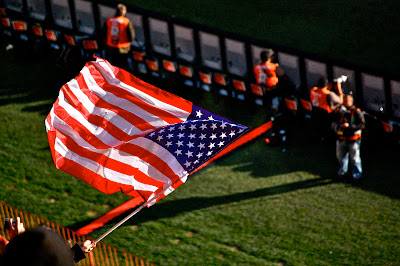 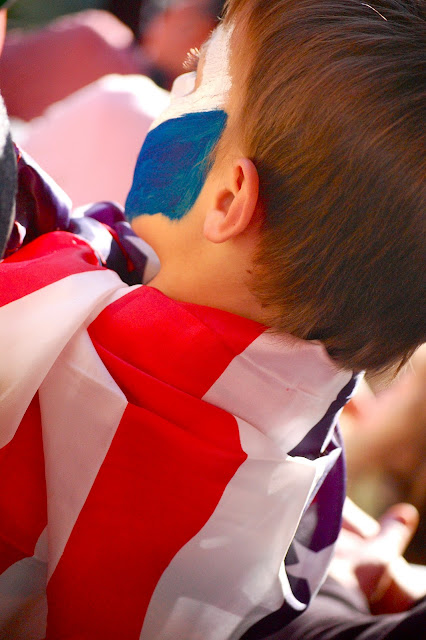 One the free kick was called, the entire stadium stood as the ball was only yards outside of the box. All 45,573 fans knew something big could happen. US fans were excited to perhaps take the lead and win the match, Slovenia fans were hoping to just clear the ball out and end in a draw. The kick came swinging in, and Edu punched it in the back of the net.
Madness. Pure madness. Screams. Tears. Laughs. Curses. Absolutely pandemonium in the park. I gave a nice wink to the USA haters sitting behind us as my slight taunt. The celebration had begun. The fans weren’t stopping. They were going nuts. We were going nuts. We were hugging strangers, slapping high fives, throwing whatever we could in pure ecstasy.
Then… confusion. Befuddled. Wondering why the third goal was not on the scoreboard. Why the ball was placed within the box for a goal kick. What has happened? Having no clue what happened, the only thing to feel was anger. Like someone had just told you that you won a billion dollars, and then just said “sike!” and took the giant check out of your hands and slapped you in the face as they ran off. It’s gut wrenching; a feeling better crying, screaming, punching something, and then completely exploding from the inside. We were robbed.

That night went from an ultimate high to a bottomed out low and for the rest of the night, as Colin and I were being introduced to new South African friends of Lise and sharing drinks with other natives, we continued to be delusional and simply were saying to ourselves with a punch-drunk smile, “we won. We won the match.”
... we drank with these guys being interviewed before the game and commiserated with them after the game and these interviews
So in the end it was two USA matches, two draws, two countries, eight months, five fellow fans watching beside me, and probably two of the most similar, yet drastically different events in my life. To you they may just read as a jumble of two soccer matches. To me, they are interconnected forever.

*To check out a ton of my favorite pictures from South Africa, check out Africa's First Cup gallery on michaeltirone.com
Posted by Michael Tirone at 4:29 PM