Combine my Passions and Guarantee Me a Memorable Experience

*-Editor's Note: My former boss recently addressed to me over a Facebook status I posted, that there are very specific things in my life that bring me happiness. I realized that I am a bit transparent in my passions, but I feel that is a good thing. This post covers a large part of the things I love in life.


There is nothing that goes better with good music than great photography...
Come to think of it, a good drink is always a lovely addition as well.
I skipped out of work early a few weeks back to catch a glimpse of a legend on the rise and a structure bound to crumble. The three hour bus ride from Baltimore up to New York City was dark, sleepy, chilly, and rainy. I awoke in New Jersey to see that the beautiful Maryland sun that I left was long gone and the NJ/NY region was rain soaked.
It didn't tamper my excitement.
I got off the bus to torrential downpours outside of Penn Station, enough to keep me trapped in the Old Navy store for at least 20 minutes to plan my next move in the terrible weather. I arrived early enough to catch up with my brother who works in Manhattan, but that plan failed due to the inclement storm.
But that didn't kill my buzz for what was coming.
A paid five dollars to a man who was wondering the wet streets of Manhattan screaming out "five dollas! UM-BRELLAS! Five dollas!" He must have doubled as a hot dog vendor at Yankee Stadium with his projected voice and pockets bulging in wet cash. He knew how to work the crowds. Sadly his product was not as useful as his selling production. The flimsy umbrella gave me just enough coverage to walk the two blocks into Penn Station so that not only my legs and feet were wet but really only my head was dry.
Still didn't break my cool.
I sat on the floor of the main corridor of Penn Station waiting for my friend Matt to get out of work so we could get to the show in the upper, UPPER west side of Manhattan. I put my things down, iPod headphones on, and pulled my camera out. I always believe that if you want to catch the everyday occurrences, especially in New York City, you have to spend some time sitting in one location.
Homeless men came over digging in the trash can I sat beside and looked at my camera, then at what I was shooting at, and then back at me. They looked perplexed by the normal things I was finding behind my lens, as they see them everyday. I snapped and snapped away while doing my best to ignore the gazers and to NOT listen to the band I will be seeing perform live in a few short hours on my iPod. (A rule of thumb I put the test earlier in the day via Facebook poll... still my thesis is undetermined.)
My headphones were ablaze.
Fyfe Dangerfield's "Barricades"-- snap -- Friendly Fires' "Hawaiian Air" --snap snap -- Frank Ocean's "The City" -- snap snap snap.

Finally, Matt arrived and we grabbed a slice at the pizza joint I had been smelling for the past hour. We caught up, talked about life as we stuffed our faces with overpriced dough and under-flavored beer. It was perfect. We knew the show would be a hike by train and we didn't want to miss any of it so we left early. The humidity poured into the subway platforms, although above our heads were water covered streets with Fahrenheit levels much lower than in the stuffy underground.  Sweating was not an option, it was the rule.
I went from cold, damp, and hungry to hot, full, and sweaty in a matter of minutes.
Still didn't bother me.
We hopped on the A train to get all the way up to 175th St. in Washington Heights. Practically into The Bronx. We jumped out of the train and up to ground level to luckily see the rain had stopped. We encountered two cabbies having an argument directly in the middle of an intersection and to then realize that the region we were in was predominantly Dominican. We spotted United Palace Theatre across the street which is where we would be seeing the great Bon Iver in concert in about an hour or so.
The theatre was old, decrepit from the outside. Looking at it closely, there weren't even signs of a concert to be had there that night. The marquee didn't mention a concert and I had to ask Matt, "is this the theatre? It looks like a rundown church." He confirmed and we went to find a place to grab a beer in the meantime.
I didn't care if I was to see Bon Iver in a shack or from an airplane above the theatre, I was too excited.
Matt and I stepped into a local bar/restaurant and immediately the amazing smells of rice, chicken, and beans slammed our faces as hard as the gaze from the locals upon us two unsuspecting white boys. We sat at the bar, order a round of beers and some tequila, to liven things up. We enjoyed a few more rounds, got a bit of a buzz going, and closed out our tab to head to the show.
We walked through the theatre doors, showed one person our tickets and instantly, it was as if we had stepped back a century in time. The main corridor of this theatre, which was built in 1930 was magnificent. Intricate detail on all the walls, religious/motivating quotations painted under sprawling archways, chandeliers hanging from the extremely high ceiling, and incredible statues surrounding the entire area. It was something out of a Roman cathedral. Two reviews of the Theatre/Cathedral which is owned by the United Church Science of Living Institute both give a widespread idea of its design.

"Its architectural style is described by the AIA Guide to New York City as "Cambodian neo-Classical" and by David W. Dunlap as "Byzantine-Romanesque-Indo-Hindu-Sino-Moorish-Persian-Eclectic-Rococo-Deco."" ... we agreed with both descriptions. 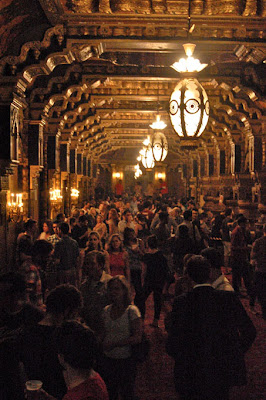 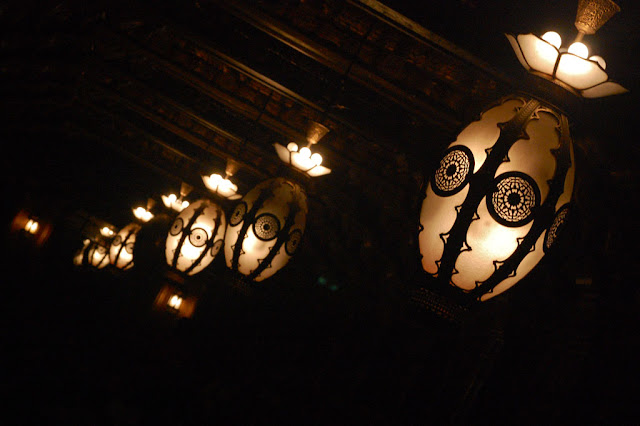 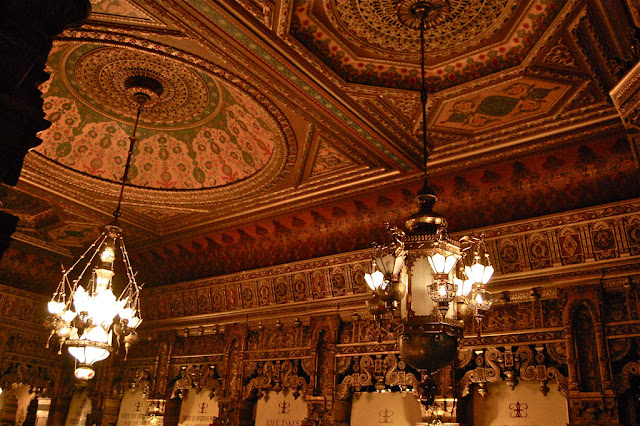 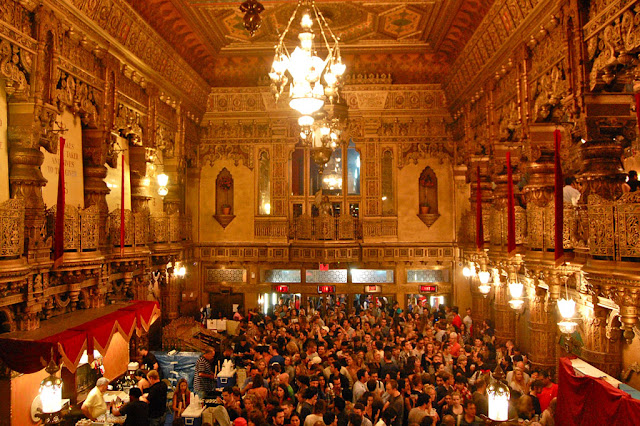 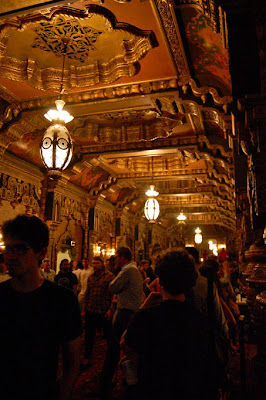 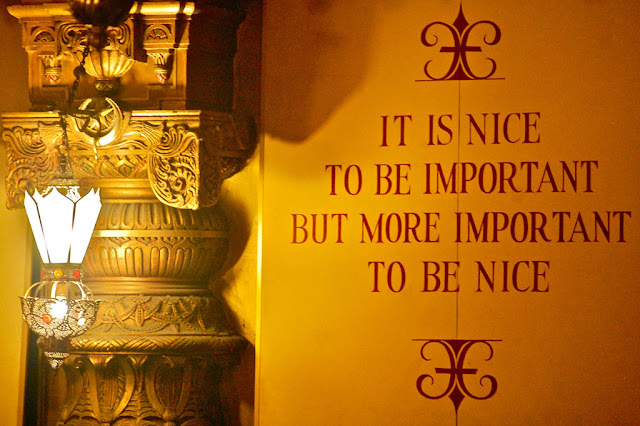 We selected the one beer option available, a tasty blonde micro-brew, and made our way through the bustling crowd to take some photos. The lighting was dim, giving the entire atmosphere a very special feel. Every single person entering the theatre's main doorway had the exact same expression of pure shock and flabbergast. Cameras were whipped out immediately from every stereotypical Bon Iver fan walking in, which presumably hurt the memorabilia booth selling band t-shirts right near the front door.
We had to walk to the second floor to enter the concert hall only to be told that our drinks (the ones we just purchased) were not allowed past the stairway to the hall.
This still was not going to kill my months of build-up to this show.
I chugged, threw away my cup and walked up to the steps surrounded by purple walls and golden trim and into the main hall.
Within twenty minutes of stepping off the Spanish speaking streets of New York City, I had been shocked by architectural beauty, not once but twice. The theatre was just as breathtaking as the corridor. The stage sat far below the balcony as the concert hall was ominously huge and mysterious. Matt and I had the very last seats of the balcony. The furthest away from the stage as possible. The fragment of disappointment in how far away we were disappeared immediately as the band begin the first chords of "Perth" and the acoustics shook the building, echoing all the way to the ceiling which we practically sat at. 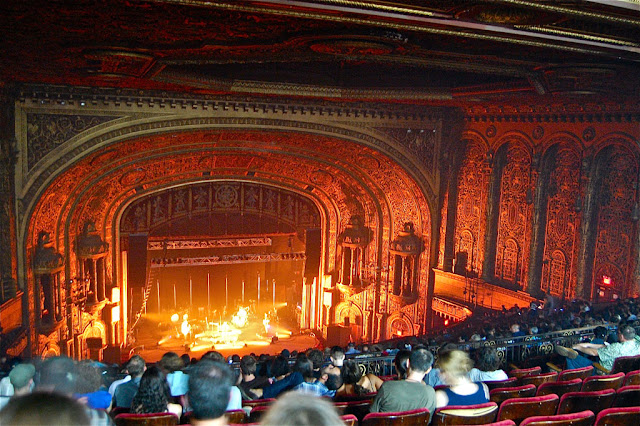 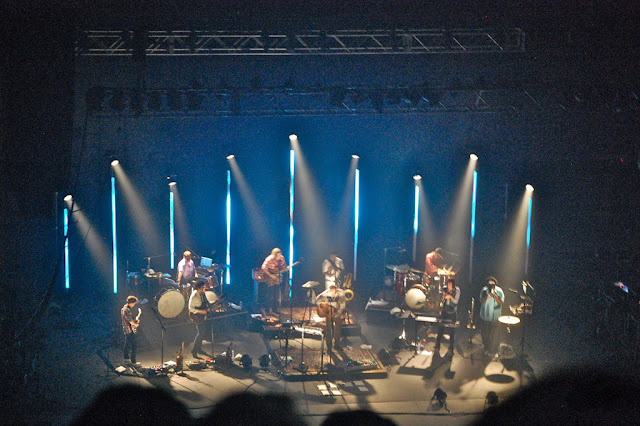 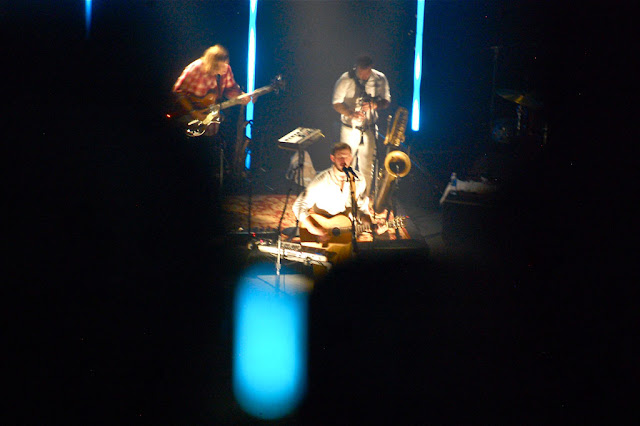 The show came and went in a blink of an eye. Each song corresponded perfectly with the venue and the energy of the building. Justin Vernon's words spoke in reverberation throughout the empty and winding hallways in the back of the theatre. Organization of the seats was terrible: odd numbers and missing letters allowed for confused concert goers to need the ushers' flashlights and assistance in finding their assigned seats (although it seemed neither two parties really knew where the seats were located). The slope of the seats left taller heads obscuring people's views of the stage, where as the back seats allowed for Matt and I to stand if we felt the need. We even discussed what kind of headache it must have been decades ago, sitting behind a woman donning her large Sunday's Best hat. The former "movie palace" is still today used as a church which can occupy a capacity of over 3,200 people. The show at times could play second fiddle to the beautiful landscape of the building. It was easy to get lost in the structure and various ways the stage lighting reflected off specks of mirror and glass within the walls. Sitting in that theatre was a dream for a variety of society; musicians and music lovers, architects and artists, historians and theologists. 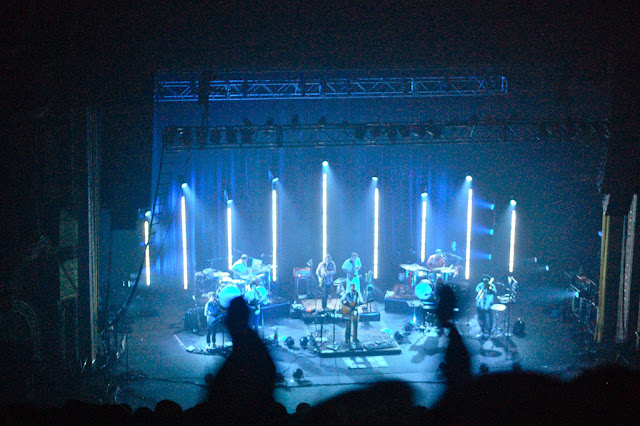 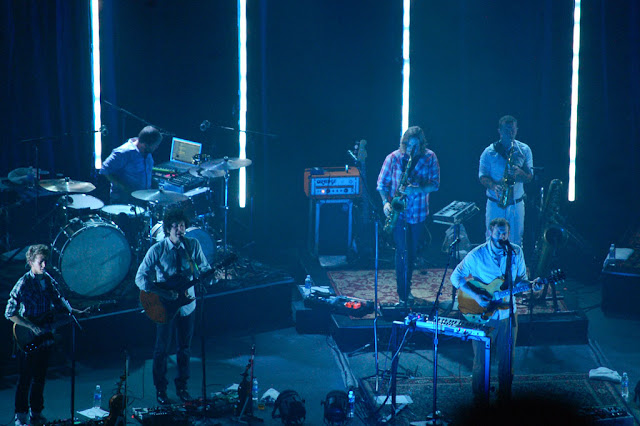 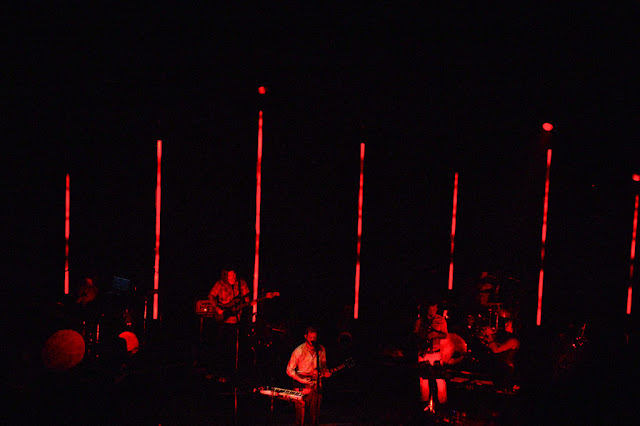 The final two songs of the Bon Iver set arrived: "The Wolves (Act I and Act II)" and "Skinny Love". Both songs included the crowds participation immensely. Vernon happily requested for the sold out audience to sing and clap along to both songs, respectively. Have 3,000 people scream -per request of Vernon- "what might have been lost" in a crescendo of volume made this concert a communal experience during "The Wolves".
I left the concert hall screaming "my my my, my my my" and clapping in beat to the snare-drum in "Skinny Love" (my favorite song) with the rest of the crowd as we all rushed as fast as possible to catch the last train going downtown to Penn Station.

I might have said my goodbyes to United Palace and Bon Iver in one fell swoop and sadly didn't show my appreciation with a round of applause. But the memories of one of the greatest concerts I've ever seen and at (hands-down) the most amazing venue I've ever been to will keep me going to shows, taking photos, listening to music. And having a beer when it's allowed.
Months of build-up and excitement and still I try not to let any misfortunes ruin my passions.

**Some other photos from that trip from Hoboken: located here and below 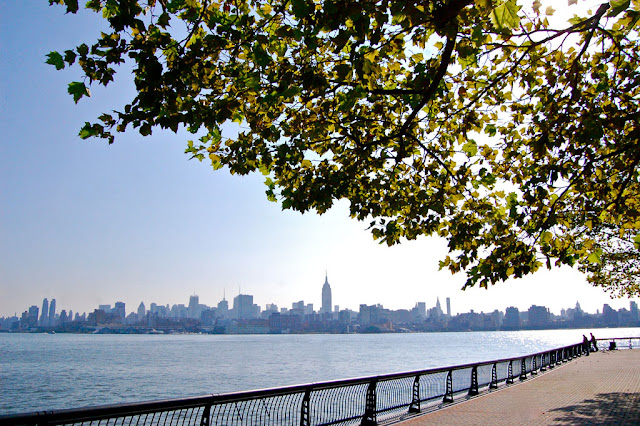 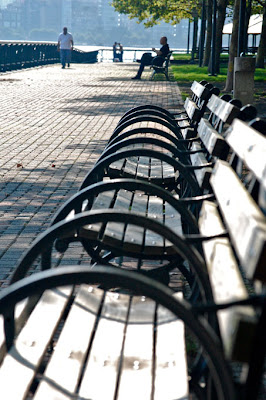 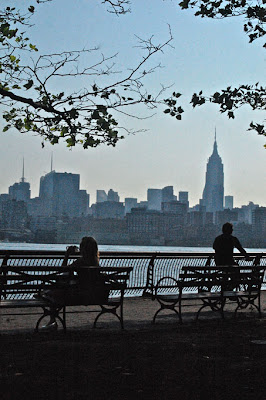 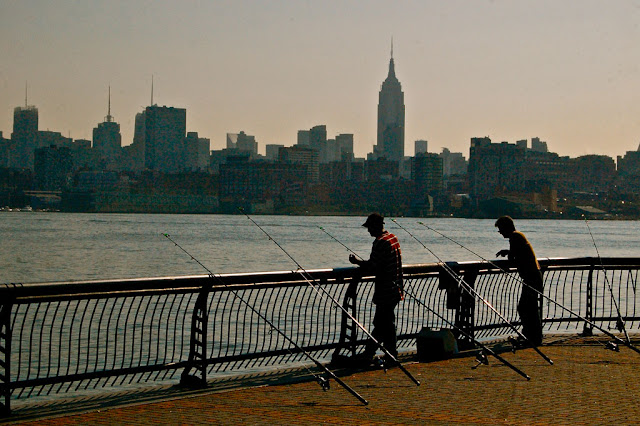 Posted by Michael Tirone at 12:08 AM No comments: