Finding the Extremes and Just Taking the Middle Path Instead... with an ice cream cone.

Recently I have been experiencing a lot of small tests in my life. Troubles and challenges that I have to get by, but if there was anything I learned while ordained as a Buddhist monk last year, it is that life’s tests only dictate your life by the decisions you make in response to those challenges or stimuli.
As we all know, life comes with ups and downs. We have our goods and bads, but it’s how you treat either extreme that determines your character. I consider myself someone who takes the positives and accentuates from them much more than the negatives. When good times happen, I take advantage of them and highlight them each and every day, sometimes subconsciously. But I also reject the bad times. I can learn from them, but I don't like them controlling my attitude and personality.
Much of Buddhism is based upon balance and being content. Being level-minded and even tempered. I look at all situations in my life as the world balancing around me. When very bad things occur, it’s up to you to see the very good things that happen just afterward. It’s natural that they will happen, you just have to distinguish them.
As a small example, I’ll take an experience I had this weekend while in the New York City.
I had just gotten off the bus from Baltimore and got dropped off right outside of Madison Square Garden. I began to walk toward the PATH train to go to Hoboken to stay with my friend Drew. On my walk over to 6th Avenue, what do I see but an old-fashioned Ice Cream Truck, parked right outside of one of the most famous arenas in the world, in one of the busiest cities in the world. 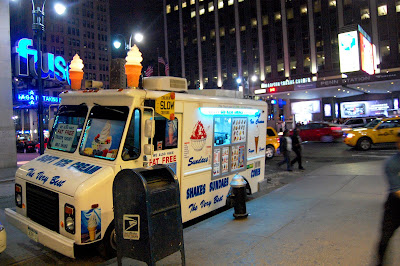 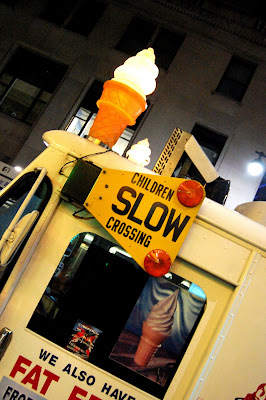 There are very few negative connotations with Ice Cream trucks (in my eyes at least) and with its boxy shape, its loud, scratchy music and all the bells and whistles to it, the juxtaposition next to MSG was pretty interesting to me. So I decided to take my camera out and take a few shots, no big deal. I asked the driver at his side window if I could take his picture and I gave him my card and showed him my photos. He loved them. I told him to give me his email address and I would send him some of the pictures. His smile lit up the already bright-light of a truck. He was ecstatic. 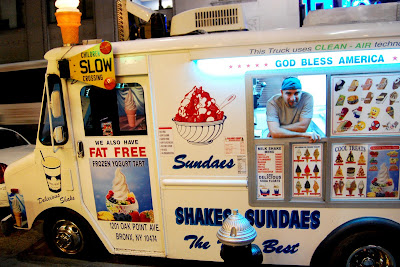 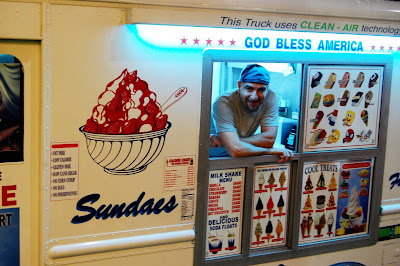 He rushed over and scribbled his email on a napkin and handed it to me.
“Thank you, thank you so much! They are such great photos,” he proclaimed in vaguely broken English. “Here, let me get you ice cream! What kind do you like?”
I told him it’s okay, I just enjoyed taking his photo and no worries. But he kept insisting, already putting the cone under the soft serve machine.

“OK, just a little vanilla would be fine, ha! Thank you, my friend.”
“No, thank you, sir. You have a great night!”
I turned away from the truck with a big smile, like I was four years old again eating some black raspberry from South Main St. Ice Cream shop with my dad. The feeling was so interesting. The excitement of a free ice cream cone brought me back to my small town in New Hampshire and my youthful, “little victories” all while knowing the man on the other side of that truck’s window was happy as well. Only then did I look around me and see anything but a small town, but rather the world’s most famous town.
As I am happily walking away I see the same reactions from everyone else in an eye-shot of the Ice Cream Truck… pure adolescent joy. Elderly men were jumping at the sight of ice cream and then even more excited to hop in front of my camera lens to take a picture beside it with big smiles on their faces and extra sprinkled vanilla cones in their hands. Who knew just standing by a truck outside of Madison Square Garden would bring such infectious joy? I was quite surprised that such a simple vehicle could do so, but as I walked away, I was happy.
That was my high moment at the time. And I carried it on through to the train, and into Hoboken. I had my headphones on with a skip in my step thinking about how I was going to write such a “fun, upbeat post on my blog." Just as I was about to get to Drew’s apartment, I cross the small side street only to have a car lay on their horn and scream out their window to me, “Yea, you F***ing idiot, just walk in front of a moving car, SH**head!”
Their sarcastic yelling barely even phased me. I literally laughed as I made it to the other side of the street and thought about how I would have taken that comment if it were not for my previous 'high'. I felt bad for the man’s high temper but kept walking as I wiped my hands dry from my sticky, melted ice-cream fingers.
My mind works in ways like this all of the time, so typically these “balancing events” occur dozens of times daily and I consciously think about them. I feel that is how I can stay level-headed.
That was my balance and instead of walking into Drew’s apartment saying, “wow I just had some prick scream at me for crossing the street!” instead I said, “I just had an awesome, FREE, ice cream cone outside of MSG. I took some photos, had a nice conversation with the driver, and went on my way. It was awesome.”
Drew and his roommates thought it was a pretty cool story. I thought it was very cool, and still do. Now I can keep that 'high' for an even longer time with my photographs and story.

As for the guy yelling at me? He might be right, maybe I should have paid more attention to crossing the street, but I’d rather happily skip across the street than concern myself with his short fuse. It’s just about balancing it out. And in the end, having a cone of ice cream and forgetting about the troubles in life for a moment are things that everyone needs once in awhile.
Posted by Michael Tirone at 2:08 AM

Hope you keep up these kinda posts, Thai. I'm secretly (not so secret anymore) mad at you for not telling me you were in NYC this past weekend, but its a big ass city and you're a popular ass guy. Next time..or else.