In light of the tragic train accident which happened in China's Zhejiang province just a week ago and the eerily ironic timing of this blog series of transportation in countries I have traveled to, I had to write about China's trains.
But first, do remember those who lost loved ones in that accident in Zhejiang province, the accident took 39 people and injured almost 200 more.
In a country where at any given moment in time, there are at least 1 million people riding a train in China, you know how heartbreaking an incident like this can be to a nation.
The most populous country in the world is interconnected by its railway system. It has 74.438 kilometers (46,235 miles) of train track, making it the most prolific railway builder in the world with addition 6,000 kilometers of track at year. Nearly 2 billion passengers use the railway today and the numbers are growing more and more.
In my personal experiences with Chinese trains (as I spent nearly five whole days in combined travel time on Chinese trains while there in 2008), they are like no other mode of transportation I've ever experienced.
My first experience with one of the most popular lines in the country was within my first 24 hours within China, in Guangzhou in the southeastern corner or the country. I was riding up to Shanghai for what was said to be an 11 hour journey.
Being unable to speak Mandarin fluently (or Cantonese in the southeastern province) was very difficult. Life was fast paced and aggressive. Train stations (in major cities) were crowded and stuffy. There were no English signs or assistance anywhere and a very dog-eat-dog world, where if you didn't raise your voice and throw your cash at the ticket collector, you didn't get a ticket. Simple as that. I saw a very elderly woman get physically pushed to the ground while in line by a younger man just so he could catch his train in time. They barked at each other while waiting for the next person in line but no one got anywhere due to the very poor organization.
Once finally getting my “hard sleeper” ticket and paying a premium price for it, I arrived at the train terminal to wait for the train to arrive. As soon as it was seen pulling in, the fighting began. Every single person began pushing, shoving, yelling, and forcing their way to the edge of the platform with such furiousness that I backed away. I didn't feel like a) dealing with the tension b) fighting for a seat I already had (or thought I did) and c) risk getting pushed onto the track with the train coming through.
The train stopped and doors opened and the people inside the train had no prayer of trying to get off before the swarms of people wormed through them to get onto the train as if it was to leave in 4 seconds.
What I saw shocked me, but I knew I had a ticket so I took my time. Bad decision.
I got onto the train to find that there were no seat assignments. My ticket had numbers on it, but they didn't mean anything. They over booked the train with ease, not even close to accidentally. There were no seats and if seats were somewhat open for perhaps half a cheek to squeeze on, they pushed me off with force. So instead of thinking I was getting a sleeper bed or at least a chair for this 11 hours train ride, I got a small corner of the train directly in front of the rancid toilet room. Which really should be described as a hole to the tracks that has crap and urine peppering the rim of it.
The train took off and I saddled up on top of my backpack as the floor itself was sticky and dirty. A bunch of men began smoking and playing cards next to me in the extended halls toward the train doorways. They kept the doors open for a bit but once the flies started coming in, and the sun went down, it began to get cold and they shut them. The smoke filled the small cornered room I sat in, which was almost a blessing in disguise as the toilet room just stunk of foul odors, especially since the bathroom door did not shut fully, so it stayed swinging open and slamming back against the frame each swaying of the wobbly train. The men began gambling with their card games and go aggressive. At this point I decided to say “mai pen rai” and embrace the moment. I tried communicating with them and tried watching what game they played on the floor. Cold shoulders and a brush of the open palm to “shoo” me away brought me right back to when my older siblings were playing games that they didn't want me to join. It was a bit disappointing but I could still watch (and take photos). 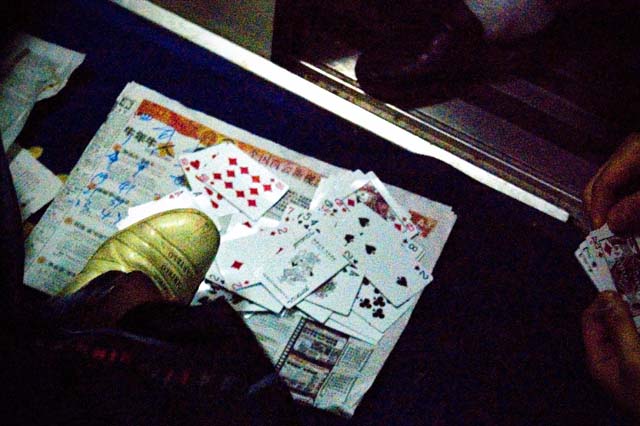 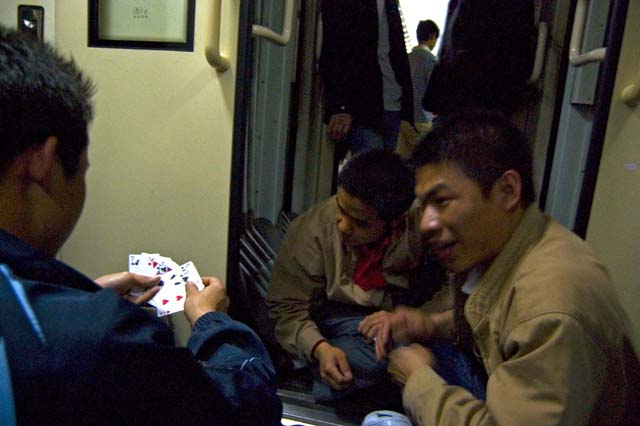 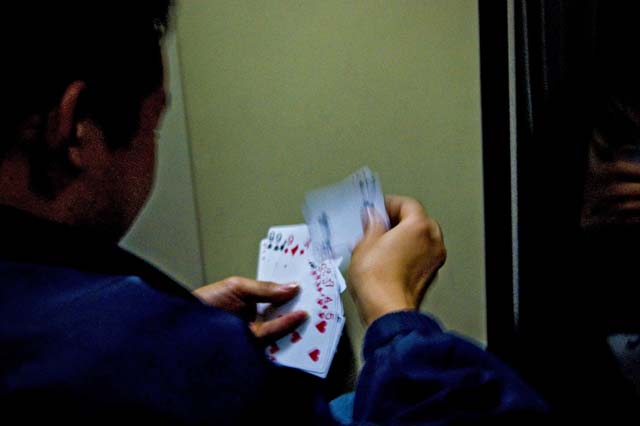 After about seven hours, and and nighttime falling, and handfuls of the neighboring men falling asleep and snoring, and hundreds of people kicking me as I sat on the floor, all I wanted to do was sleep. No. Way. That was happening. I looked for open seats but as soon as someone got up to go to the bathroom, another would steal their seat for the moment and then argue who's seat it was when the person returned.
The water fountain was to my right above my head, and it spat out luke-warm water or steaming hot water for tea. Every person on the train carried their own special glass canister with raw tea in it. They would fill the canister with piping hot water which occasionally splashed onto my head as I read my book (which was dangerously the Dalai Lama's autobiography that I carefully folded the front cover over as it is illegal for his publications to be in the country or be read, but I took the risk).
I hadn't eaten anything since boarding and there were no food carts of any sorts. I was thirsty, tired, hungry, and annoyed. The bathroom door slamming. The men smoking. The people kicking me. The water splashing me. The yelling. The smells. The uncomfortable position on the floor. It all was waring on me and I hadn't been in the country for more than 30 hours yet.
Come about nine hours into the trip, it got worse. An epidemic began to spread through the train and lines began to form outside of the bathroom, right at my feet. At first I was too delusional to realize what was going on. It was not until someone ran up to the fountain near my head and began vomiting into it when I realized that half the train was getting ill. And they all were coming to MY bathroom to get sick in.
With an empty stomach and the smells changing from wretched to unbearable, the train ride definitely reached a point of no return. The thoughts came streaming into my head:
“how am I going to survive this country for a month?”
“how am I going to survive this train for two more hours?”
“I plan to travel on trains throughout the entire month, please tell me they won't all be like this.”
“No. They can't all be like this. It can't really get much worse than this.”
I had to start thinking on the bright side of things and saying, “well, at least the worst ride will be out of my way, once its over!”
The eleventh hour hit and I saw not a signal indication that we were close to Shanghai at all. I met a man who spoke a little English and saw I was holding a ticket. Someone I stuck a deal with him to pay me 150 yuan for my ticket since he did not have one and was afraid of being caught without one. In exchange he would let me sit in his seat until we arrived in Shanghai as he was going to Beijing, so it was a better deal for him to have his seat saved by me for the next few hours. He was kind enough to pay me although he did try to just take my ticket without paying me at first. I asked him what time we would arrive in Shanghai...
“One or two more hours right?” I asked.
“Ha!” he shook his head, and pointed to a number on the ticket and then to his watch which read 5:30am. The time on the ticket said 11:00 which is what I thought was to be the total time in hours, but really it was the arriving time. Which meant the train still had about six hours left, so a total of 15 hours.
Oh boy.
My worst nightmare had come true, and my train from hell was extended to overtime. By that time I assured myself these two things...
“The rest of the trains WILL NOT be as bad as this one,” and “I'm making sure I get a sleeper for the rest of the trains, even if it kills me.”
… the nine more trains including ones totaling 15, 17, 13, 24, and 19 hours respectively were actually much more tolerable. Thank goodness. But I learned all my lessons on my first train ride in China, pack food, prepare for delays/the worst, stay hydrated, pay premium for beds, and just take in the journey. It's very difficult not to let the trains be a part of your journey when nearly a quarter of my trip was on one.
*Below are some random photos from China, some on trains and some attributed to the trains taking me there. Either way, they all peace together my trip. 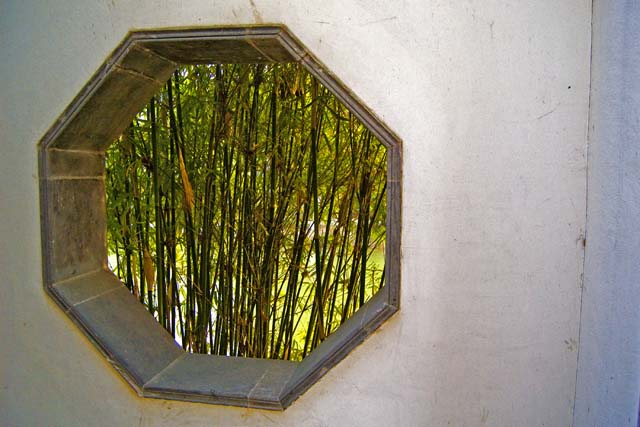 Posted by Michael Tirone at 9:40 PM