May Your Madness be Meaningful... and Mad ~ Travelog Thursday

As I sit in my living room with the patio doors open pouring in fresh spring air, i have two laptops on my desk and our tv on rotation with three of the four NCAA basketball games on every possible way. A mirage of sounds are coming out of apartment 2B; shoes squeaking, cheerleaders making out-of-rhythm cheers from all the 9 teams currently playing , in-depth announcers spatting out the plays, and crowds roaring at various big plays. What is in front of me? My brackets ridden with cross-outs, fill-ins, and highlight marks. A warrior's prep kit sits in front of me; a glass of Crystal Lite to get hydrated before the holiday of drunkenness commences tonight and my St. Patrick's green clothing folded on my coffee table, ready to be adorn shortly. Today is March 17th. Most would consider this a glorious day for the Irish and alcohol lovers, but for me, that plays second fiddle to the unofficial holiday I am celebrating today. This is bigger than Christmas, it's more exciting. It's more significant than Thanksgiving, it's more meaningful. This is more patriotic than Independence Day, fireworks happen sporadically and not in an organized finale.

This is the first day of March Madness. If there has been a consistent sporting event that I have written about throughout my life, it has been the NCAA tournament. I remember the very first time I filled out a bracket for my dad's pool. I knew a little bit about college basketball as a 12 year old, but that moment it clicked. My first tournament pool and my first victory against adults. It was invigorating. From then on I have filled out a bracket; at 13 I made two and wrote a poem about how fun it was, at 14 I had three brackets and spent hours on research, by high school it was a full-fledged addiction. I skipped school and took “sick days” for the first two days of the tourney. At 15 I sat and watched every game with the each timeout break giving live updates on the start of America's war in Afghanistan. It was a memory I will always have, having the thrilling excitement of the first games and brackets being tested but the lows of teenage friends having to watch as our country embarked on war. Once college tipped off, it was not even a question, classes took a backseat.
So I had ten years of pure ecstasy of the tournament and then I left to live abroad in Thailand. College basketball was nearly impossible to find on television in The Land of Smiles and so I did not pay very much attention to the regular season other than my favorite Tar Heels of North Carolina. The regular season came and went and I got my usual college basketball tournament invitations. A tradition is a tradition so I absolutely signed up.

The sad part about the 2009 tournament was this... I did not watch a single game. My girlfriend and I were traveling like crazy throughout China, jumping from city to city, ancient history to World Heritage Sites, floors of sleeper trains to back seats of smoke-filled buses. If there is such thing as madness outside of the tournament, we surely found it in the world's most populous country. It came to the point once the brackets came out that I filled in my bracket quite blindly. I sat at a computer lab at the University of Beijing where we were staying for a few days and like any true fan, your bias takes president, so I picked my Heels to get through the month of madness and win it all. I signed out from my account and sickeningly put my love, my bracket, my tournament in the rear-view mirror to focus on the whirlwind traveling ahead.
The painful feeling is indescribable. I imagine it is similar to skipping out on your child's school play to go an important business meeting. You know the responsibilities of work but at the expense of disappointing your kid. The cost/benefits teeter both ways and in the end, you realize you can't do everything. In our situation, being outside of the real world while traveling through China felt like any other normal day. We woke up, skipped breakfast because neither of us were in the mood for steamed dumplings at 9am, hit the road to visit the city's popular cites, take hundreds of pictures, walk about three miles on average, and then get home. Every fourth day or so we would check our email and that is when the reality of what was happening kicked in. I would check Facebook and see friends writing statuses like “I can't believe Cleveland St knocked off Wake Forest!” or “This is truly Madness this year!” It bothered me to be missing out on the action but I simply looked away from the computer and realizing that I was in China wishing I was watching basketball when within the same day I climbed the Great Wall. My anger was put at ease though when I checked my bracket and saw that my Tar Heels had won the National Championship. I jumped out of my seat and gave some cheers and hugs to my girlfriend, but pretty minimal in comparison to my celebration of the last time they won the title while in college.
That tournament as a whole was pretty anti-climatic even with my favorite squad winning the title, but the following year my attention to the field of 64 was totally distracted. So 2009 was focused on travel within the world's largest country and 2010 was focused on my time in the world's largest democracy, India. 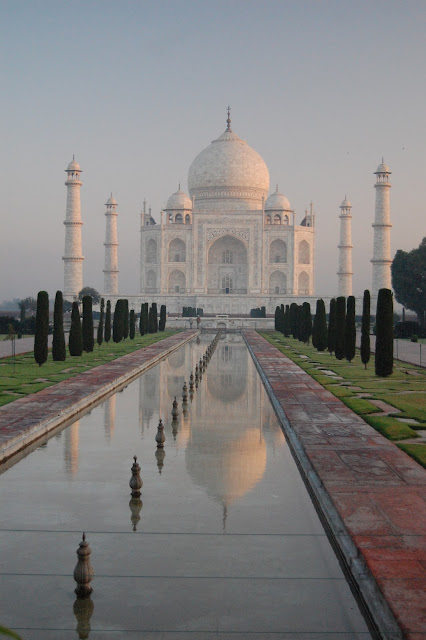 In 2010, my mind was focused on far too many things than the NCAA tourney. I was still living in Thailand, looking for jobs for my return back to America in July, ordaining as a Buddhist monk for one month, traveling through South Africa for the World Cup, and many other things that were on my mind before the March tournament kicked off. So clearly I was a bit distracted as my crazy stretch of six months full of travel, spiritual exploration, and everything in between was not looking best for my old passion of March Madness. I left for India on the last day of February for a month and a half of travel throughout India and Nepal.
Unlike my time in China, where I kept up to date on the tourney via ESPN.com, in India I paid like attention to the entire tourney. India kept my attention and more. Maybe it was the fact that my Tar Heels did not make the tourney, or maybe I had lost my heart for the Madness, but all I know is, it only took two years out for me to lose my touch. I got killed in my bracket online and I was so deeply entrenched in “Incredible India”. The most memorable part of the entire tourney was my time in Dharamasala, India, the small high-top town that resides the Tibetan Government in Exile including His Holiness the Dalai Lama. With such an amazing town full of color, life, and spirituality kept my mind occupied from basketball or even the Western world. My slice of “normal” life came when I Skyped my girlfriend who was already back from India with me for just a week. She kept me updated with the amazing run Butler made and in full crystal-clear description of the National Title game against Duke just minutes after it finished. She was still emotional and the energy and adrenaline in her voice made me miss my Madness. After signing off with her in the middle of a Internet cafe full of Westerners, I decided to strike a conversation with the guy sitting next me who was talking to his friend about Duke's title win.

“Hey, did you just hear that Duke won the title over Butler with a half-court shot just missing?” I said.
“Yea, my buddy just told me. Said it was the best basketball game he'd ever seen. Too bad because I hate Duke,” he said.
“YES! I'm so glad you said that! I can't stand Duke and as much as I hate missing the tourney, I'm glad I never saw them win the title.”
There we sat, strangers commiserating about a basketball team from a university that we've never set foot on and how we can't stand their program or coach, within one of the most peaceful places in the world. The contrast was ironic and an a bit embarrassing, but it was the necessary taste of Madness to just keep us from getting lost in the outside world.
So just a year later, here I sit in my apartment.
No strangers around me.
No holy temples just blocks away.
No chai tea vendors yelling from the streets.
Bracket updates happen every two hours rather than two weeks. Excitement coming from buzzer-beaters and poor foul calls, not from riding camels and climbing the world's highest mountains. My Madness has many faces and both are beautiful, but I must say, if there is ever a time where I'm in my element, the first two days of the NCAA Tournament within America has got to be a number one seed in my bracketology of Madness.
Posted by Michael Tirone at 12:42 AM